At 17, Kevin Cao is one of our younger volunteers. He’s been studying Chinese since he was five, so has heaps of personal insight into how to learn and teach a language.

“My parents and sister were born in China, I’m the only one who was born in New Zealand,” Kevin says.

Kevin was encouraged to speak Chinese at home because his parents believe it’s important to keep the language alive.

It was by making a huge commitment to going along to Chinese School every Saturday for 11 years, that Kevin really honed his speaking skills and learned to read and write.

He says he was initially reluctant. “At the beginning I definitely wasn’t a fan but learning with my friends made it a lot more interesting.

“It’s also great because I can talk to international students at school. I’ve learnt a lot from their experiences living in China, so being able to communicate with them is a big plus.”

Along the way, Kevin’s achieved both level three in the Chinese Proficiency Test and in NCEA Chinese. He says having a qualification to show your Chinese level is pretty neat. He's also noticed a big increase in the number of students attending Chinese School and says people in Palmerston North are more involved in Chinese cultural activities these days.

When most of his peers left for university, he took on the job of coaching the next generation of kids.

Through Chinese School Kevin was introduced to Lion Dancing and became an active member of the Chinese Association’s troupe. “It’s a group of maybe ten. We train and then perform at different cultural festivals and Chinese celebrations.”

For the uninitiated, Kevin explains the difference between Lion and Dragon Dancing.

“Lion Dance is two people in a costume, the head and tail. With a Dragon there’s a lot more people, and you’re holding sticks. So, for a Lion Dance, you’re actually inside the costume.”

When most of his peers left for university two years back, he took on the job of coaching the next generation of kids. “It’s one of the most rewarding experiences,” Kevin says. “Seeing them improve week in, week out.”

Now in his last year at Palmerston North Boys High, Kevin wanted to do more volunteering: keen to give back to his community before he heads off to university.

He already had a pretty comfortable connection with English Language Partners, as it’s where his mum used to work. “When I was at primary school, I couldn’t be home alone in the holidays, so I’d go to work with mum.” He remembers drawing huge pictures on a whiteboard when he was around nine. “As soon as I saw a class coming, I erased them quickly!”

“I was just looking at all these learners walking in, and I’d sit at the back of the lessons, just watching,” he says. “I guess, when I was looking for things to volunteer for, one of the things that came back to me was English Language Partners.”

Kevin already had a pretty comfortable connection with English Language Partners, as it’s where his mum used to work.

Kevin’s learner at the moment is 80-year-old David Kah. Kevin says David’s keen to express his thoughts and opinions in English. “He’s into news and politics,” he says.

“He never had a proper education. Because he’s from Myanmar, his life was kind of ‘on the road’ so he’s super motivated, which is great.”

Kevin says David has a great sense of humour. “He loves cracking jokes. He’s really fun to teach. It’s super rewarding.” And he says David has made fast progress. “The speed he picks up on concepts in the news articles is impressive.”

Sue Jenkins, who’s the ESOL Home Tutor Coordinator, matched the duo and says the pair work well together. “Kevin’s just discovered David has the same passion for football,” Sue says. “David will sometimes get up at 3 a.m. to watch a game!"

Sue says that even with a 60-year age gap, learners and tutors can find things to share. “And what a great opportunity to practise sports vocab together.”

Kevin is looking forward to heading off to study engineering next year. “Moving to a larger city like Auckland, with so many opportunities, is super exciting.”

No doubt he’ll be looking for local cultural activities to join. And if he has any free time, new Kiwis in Auckland may be lucky enough to benefit from Kevin’s many language and teaching skills.

Do you have skills to share? Volunteer and help build stronger, caring communities!

This is some text inside of a div block.
At Home 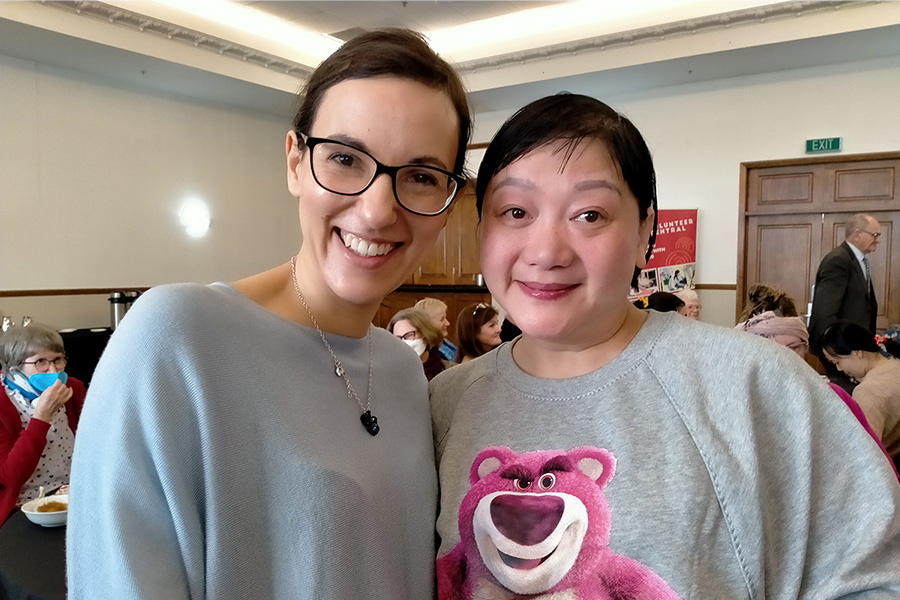 From English learner to volunteer extraordinaire