Study NZCEL and “feel good about being part of New Zealand.”

Junior Taala and his younger brother arrived in New Zealand three months ago, with aspirations to create a prosperous future.

They have moved to Porirua, staying with their uncle, who has always encouraged them to “dream big.”

Junior had only been in town for two weeks before signing up to study NZCEL class at the ELP Porirua centre, having heard through his networks that ELP provided a safe and supportive environment for migrants.

“I learned English in Samoa, but didn’t practise or focus much. My focus was much more on sport, and I didn’t really treat English seriously.”

“It wasn’t until I got here that I realised how important English is. I saw that I couldn’t read or speak like a New Zealand person.”

Since being here, Junior has become committed to improving his English, and he has a new goal to motivate him.

While flicking through an issue of ELP’s Connecting Cultures magazine, he stumbled across an article about former refugee Eric Alvarez, from El Salvador, who is now a police officer in Rotorua. Junior was inspired by Eric’s story and is now committed to following in his footsteps.

Gaining NZCEL level 2 will enable Junior to take his studies further. Once he graduates with his certificate, he plans to attend Whitereia to further his computer and maths skills before applying for Police College.

It’s going to be hard work, but Junior knows that he’ll need to persevere to reach his goal.

“I’ve given myself the challenge. If I don’t do the work, I don’t get what I want.”

Junior is really enjoying the opportunity to study NZCEL.

“The teacher helps a lot, with a lot of new vocabulary. The staff are like friends, they always talk to us and are really welcoming.”

Recently, he spoke to a Pakeha girl outside of class for the first time at church. He found that he was confident, asked her to speak slowly and clearly, and it occurred to him – “Yeah, what I’m learning is really working!”

Junior says, “If you’ve come to New Zealand and you are aiming for something in life, you need English. I’m a shy person, but I’ve learned to be comfortable. Everyone is here at ELP to learn, to get good jobs and a good future.”

“It makes me feel good about being part of New Zealand. I’m excited to become a policeman, and I’ll never give up until I am.” 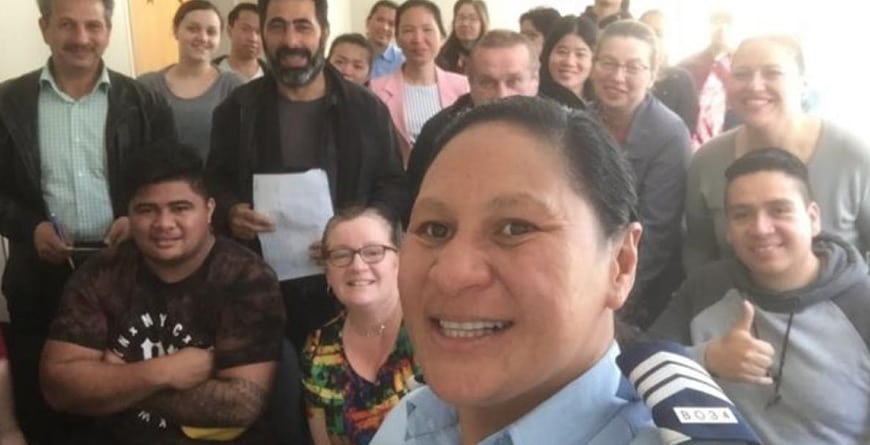