“I have had my student for three years now and it is sometimes two-steps forward and one-step back. Progress can be frustrating and slow, and I wonder sometimes whether my teaching makes an impact. That is why my last year’s ‘eureka’ moment was so significant.

“We were going through the topic ‘General Election 2020 in New Zealand’. During our lesson in the last week of the 2020 General Election, my learner told me that her husband and his brothers had voted but she and her sisters-in-law had not, as they only had permanent residency. I informed her that they were also eligible to vote.

“She got very excited and asked me to help her enrol online. I told her it would be for the next election, not the 2020. She became sad and explained to me that due to all that had happened in the past years, with the earthquake and the mosque shooting in Christchurch, where she had lost friends, she felt highly motivated to vote for the party supporting her community and was determined to vote.

“I called the voting help line and they told us to go to her nearest voting place and cast a special vote. She would need to provide her passport and confirmation of address.

“She put on her full burqa, fetched her passport and off we went to the nearest voting place.”

“The volunteers were great at helping her with the voting process and my student discovered why it is so important to be able to write down personal details. She needed to fill out many forms in duplicate with her personal information for the special vote.

“I was very proud of her that she showed such initiative, perseverance, and braveness to go by herself, with a little help from me and to cast her first independent democratic vote.”

“Her sisters-in-law also used their special votes on election day, after she told them how easy it was to get out and vote.”

‍Thank you for sharing your story Hue-Quan Trinh. We’re very proud of  you and and your learner’s achievements. 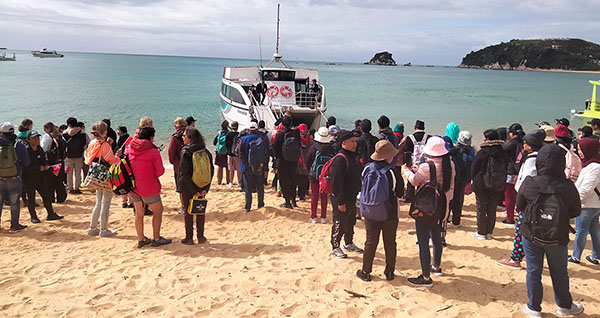 English through the lens of art

A trip back home

English through the lens of art

Grow the language, grow the business

Grow the language, grow the business