For Thang Shalom Innkuan, brushing up his English has brought benefits at work and home.

Thang, who grew up speaking Zomi and Burmese, might be the busiest man in the Hutt Valley.

Between days working as an apprentice for Pure Painting and three night classes at English Language Partners Hutt every week, fitting in dinner can sometimes be a challenge. But Thang says life is getting easier.

Things were more difficult when he arrived with his wife and children in New Zealand as refugees from Myanmar in 2012. Back then, “I didn’t know how to do anything. No friends, just my family, I didn’t have a car, anything.”

Still, Thang is happy his family followed a friend’s recommendation to come to New Zealand. “It’s a good country. People are kind and friendly.”

Thang had some experience painting in Myanmar, but found a lot of differences between the industry there and in New Zealand.

After studying at Weltec, Thang could’ve chosen to work for a Burmese company, but his employer Shaun Chait says Thang wanted to choose a Kiwi company where English is the language spoken.

“Thang is someone with commitment, who wants to make a go of it.” Shaun Chait, Pure Painting.

At first, Thang found working in English difficult. He didn’t always know the name for his tools, or some parts of the houses he was painting.

But Thang says working and studying have helped him pick up new words. “Maybe tonight I learn [new vocabulary] in our class, and tomorrow, I use some with the Kiwi guys.”

“Every day I work, I write in my work plan. I’m writing every day, but the spelling is sometimes not correct.”

Cultural differences in the ways Kiwis communicate at work have also been a hurdle. Thang has overcome these with English Language Partners’ help. He learnt New Zealanders sometimes offer criticism in a less direct way than people in Myanmar.

Thang says his English for Employees classes have explained these subtle differences in meaning, as well as everyday vocabulary he needs on the job.

Shaun says he and other workmates have witnessed Thang’s progress. “He was very quiet at the start, but it wasn’t because of his personality, it was because of a bit of an English barrier.”

As his English has improved, Thang has been able to contribute more at meetings where work is planned. “He’s a very popular member of the team,” Shaun says. “He gets jokes and he makes jokes.”

Shaun says employers can often raise voices or talk in pidgin English with workers who have English as a second or third language, but treating Thang like any other workmate has been their approach.

“We speak to him in New Zealand English. English is a skill like the others Thang has gradually picked up over the course of his apprenticeship. Employers could approach employing speakers of other languages with that mindset.”
- Shaun Chait, Pure Painting

English Language Partners’ classes have also had benefits outside of work. With three of Thang’s four children at primary and secondary school, both generations’ growing English skills reinforce each other. “We’re reading together, doing homework, or times tables.”

“Yeah, I’m determined. I want to plan for my future.”

Need better English at work? Ask your local centre about English for Employees. 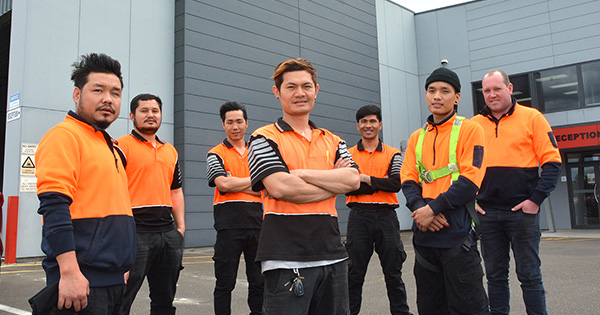 Joining in with Kiwi workplace meetings and lunchroom chat

Joining in with Kiwi workplace meetings and lunchroom chat

Girls in Business – English for Employees

Girls in Business – English for Employees